I’ve been using Sublime Text for a few years and up until now I had stuck with version 2. I kept an eye on the v3 beta for a while and noticed that development was slow (previous update was 2013) and since all the packages I used were compatible with v2 I stuck with it.

Today I noticed some packages had just stopped working so I went to re-install them and noticed they didn’t support v2 anymore, I checked out the v3 release updates and noticed there had been a new release a little over a month ago so I decided to take the plunge and move across.

You can view My Sublime Text 2 Setup and the steps are pretty much the same except referencing version 3. I won’t go through them again instead I will just list what my setup now looks like.

I move to Spacegray, I just like the overall look of it, especially the eighties variant of the theme.

I’m still not a huge fan of the default icon so I took a quick look on dribble for a replacement. I find it a good place to get all sorts of replacement icons.

I settled on this replacement by Cole Bemis.

Here is a list of packages I have installed (they are pretty much the same I just took the time to double check and update links to the v3 compatible versions):

Alignment – Dead-simple alignment of multi-line selections and multiple selections for Sublime Text.
BracketHighlighter – will highlight brackets (or defined bracket like start and end blocks) surrounding the cursor.
Emmet – a plugin which greatly improves HTML & CSS workflow.
MoveTab – Plugin for Sublime Text to move tabs around.
SublimeLinter – a plugin that supports “lint” programs (known as “linters”). SublimeLinter highlights lines of code the linter deems to contain (potential) errors.
GitGutter – A plugin to show an icon in the gutter area indicating whether a line has been inserted, modified or deleted.
SublimeCodeIntel – Code intelligence plugin.
DashDoc – provides integration of Dash into Sublime Text.
ColorHighlighter – a plugin which unobtrusively previews hexadecimal color values by underlaying the selected hex codes and also allows for a colour picker.
DocBlockr – A simple way to create doc blocks.

And that’s pretty much it. 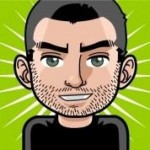 Jason Wadey Founder and Managing Director of 80ways developing online systems and mobile applications. Currently focusing most efforts into the sports market and our own products.